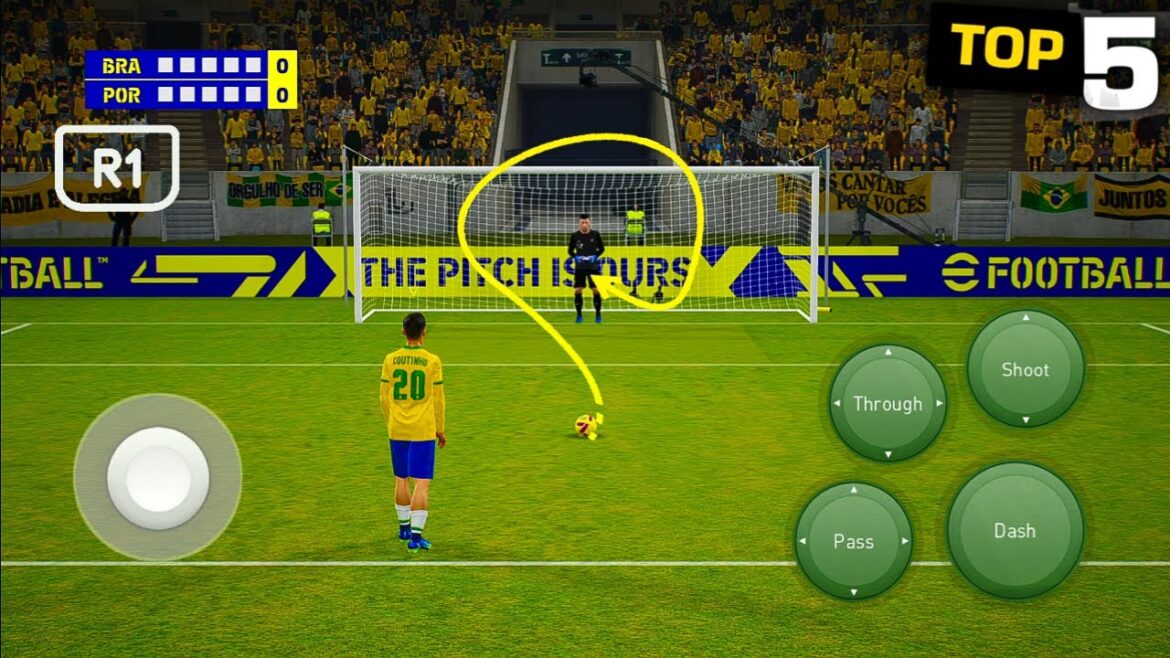 Today’s blog is all about – Top 5 best football games for Android. Football, also called association football or soccer, is a game involving two teams of 11 players who try to maneuver the ball into the other team’s goal without using their hands or arms. The team that scores more goals wins. Football is the world’s most popular ball game in numbers of participants and spectators.

Football is one of the most popular sports in the world, and it has spawned countless video games over the years. From classic hits like FIFA to modern classics like Pro Evolution Soccer, these games have provided hours of entertainment to gamers of all ages. Here we take a look at some of the best football games ever created, from the classic to the modern to the obscure. Whether you’re looking for a realistic simulation or an over-the-top arcade experience, these are some of the best football games ever made.

FIFA Mobile is a football game for Android devices developed by Electronic Arts. It is an interesting and interactive game that allows players to experience the excitement and thrill of the football game.

The graphics are decent and the controls are easy to get the hang of. The game features many different modes such as tournaments, leagues, and events. The game also has a live chat that allows you to interact with other players in real time

.The tournaments and leagues are a great way to test your skills against other players and prove your worth as a football player. The events are also exciting and provide a great way to win special rewards.

The game has a wide range of players to choose from and each player has unique abilities and traits. This allows players to customize their team according to their playing style. Additionally, the game allows you to upgrade your players and buy new ones by using coins and points earned by playing the game.

Overall, FIFA Mobile is a great game for Android users that provides an enjoyable football experience. The graphics are good, the controls are easy to learn, and the tournaments and events provide a great way to challenge yourself and prove your worth as a football player.

Efootball 2023 is an android football game that has been released in the last year. It is a realistic football game that allows you to choose from a variety of teams and players to build your own team. You can also play online against other players from around the world and take part in tournaments.

Efootball 2023 has some excellent graphics and animations that make the game look very realistic. The players move and act in a very realistic way, and the stadiums and crowds look incredibly lifelike. The game also features a great soundtrack and sound effects that help to create a more immersive experience.

The controls are easy to use and are quite intuitive. You can use the touch screen to control your players, and the buttons and joystick to move them around the field. The game also features a tutorial mode that helps you learn the basics of the game.

Dream League Soccer is an exciting android football game that allows the player to experience the thrill of being a professional football manager. The game has an intuitive interface that allows for easy navigation and an immersive 3D experience. The player is able to create their own team from scratch, manage their finances, and take part in daily challenges and tournaments.

Dream League Soccer has an impressive array of features and gameplay mechanics that make it an enjoyable and challenging experience. The player has the ability to upgrade their team with better players, purchase new stadiums and equipment, and take part in different leagues. The game also includes a unique team chemistry mechanic that encourages the player to develop their team’s chemistry in order to boost their performance on the field.

The graphics of Dream League Soccer are top-notch, and the game runs smoothly on most android devices. The sound effects and music add to the immersive experience, and the controls are intuitive and responsive.Overall

Total Football is an Android football game that is sure to excite football fans of all ages. The game is fully immersive, combining realistic graphics and sound effects with an easy-to-use interface.

The game allows you to play in a variety of different modes including exhibition, career, tournament, and multiplayer.The graphics in Total Football are top notch.

The players are highly detailed and the stadiums are realistic and look great on your device. The sound effects are also amazing, and really bring the game to life. The game controls are simple and intuitive, making it easy to get into the game quickly.

The game also features a number of different modes for you to choose from. In exhibition mode, you can play a quick match against a randomly generated opponent. If you want to get more serious, you can take part in a career or tournament mode, which allows you to play a series of matches. The multiplayer mode lets you play against other people online.

Overall, Total Football is a great football game for Android devices. The graphics and sound effects are excellent, and the controls are easy to pick up. The variety of game modes makes it great for short or long gaming sessions. If you’re a football fan, you should try it.

VIVE LE FOOTBALL is an android football game developed by French game studio, Asmodee Digital. It is a fast-paced, exciting game that brings you into the world of football, allowing you to experience the thrilling action of a real-life match.

The game has an excellent 3D graphics engine and animations, making it look very realistic. The controls are easy to learn and the game mechanics are simple yet effective. There are various game modes, from friendly matches to tournaments. You can even customize your team, with a variety of players from different countries.

The AI in VIVE LE FOOTBALL is quite impressive, as the computer opponents are able to act realistically, taking into account their players’ abilities and tactics. Multiplayer is also an option, allowing you to compete with your friends or other players online. The game also provides a lot of replay value, with its multiple difficulty levels and different strategies to use.

Overall, VIVE LE FOOTBALL is an excellent football game for Android. It is packed with features and has great 3D graphics, making it an immersive and enjoyable experience. The game controls are easy to learn and the AI is quite impressive. The game also provides a lot of replay value.

Football android games provide an immersive and entertaining gaming experience for players of all ages. The games feature realistic graphics, physics and game mechanics and offer a wide variety of game modes for players to choose from. With the variety of game modes available, players can customize their gaming experience to suit their individual preferences. The games also offer a wide range of rewards and achievements that can be unlocked as the player progresses. All in all, football android games offer an engaging and entertaining gaming experience for all players.